Initiate Media was founded from one print magazine.
In 2003 a newly-married husband and wife team acquired Alive magazine, at the time Australia’s leading Christian magazine.

Initiate Media is a leading independent Christian media company, operating globally. As a non-denominational organization, we seek to make God famous – and relevant – throughout the world.

Initiate Media produces a range of media products and services to achieve our vision. Our team, based across the globe, are all focused on our goal of producing ‘world’s-best’ media, with the aim of spreading the word of God.

Initiate Media was formed by Matt and Nicole Danswan and the company came into existence in May 2003 when the couple acquired what was at the time Australia’s leading non-denominational Christian magazine: Alive magazine. Neither of them had a desire to be in Christian media, but a chance meeting with the publisher of Alive saw Matt, who was a publisher at the time, take on the reins in what would simply be a side ministry while he focused on other business activities.

Nicole left her job in marketing at a large church to run the magazine, which was quickly followed up with the acquisition of Christian Woman magazine, the Christian Business Directory, owned and published by Hillsong, and with a further string of acquisitions and launches, the company quickly became the southern hemisphere’s leading Christian publisher.

It became apparent very quickly that their future resided in Christian media, so the couple let go of a number of other business ventures in an effort to build out the vision that they saw.

Their faith story of building a business without debt has been documented in a book titled NOT Business As Usual.

Over the years we have developed a range of print and digital media products, successfully navigating the difficult transition from being a print-based publishing company, into becoming a digital first media company.

In this current age Initiate Media sees the majority of its revenues flowing from its agency and services businesses. We build websites, apps, and provide publishing and print management services to authors, churches, businesses and non-profits globally.

While we are a digital first company, our services business sees millions of print units dispatched globally each year.

The Internet, including technology like iPads and ebooks, has given media companies the opportunity to open up new markets and areas that were once not possible. With the team we have, coupled with our knowledge and experience in both print and online media, the future has never looked brighter 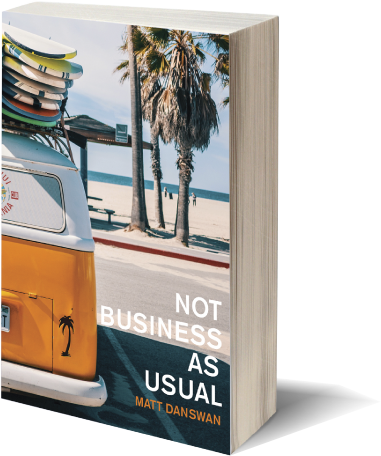 A business book and autobiography all wrapped into one, Matt Danswan shares his personal path of faith journey in launching one of the world's leading Christian media companies.